Do checklists count as cards? Generally I'd say they do, and it's my collection, my rules. Thus, today's eBay penny card post has 2 cards for 2 cents.

While checklists are cards, they'd be a bit of a stretch to be the only card of a post, so I doubled up on this one, and added in the next card up, a 2005 Skybox LE, which stands for Limited Edition. These are both from sets that are yet again new to my collection.

I spoiled the end a bit in the title, but let's see a 2010 Topps Series 2 pack I pulled from my pack stash, originally from a repack box.

I don't hate horizontal cards. I just don't like how they mess with my scanning groups. Also, even though it's been a few years, it's still weird to think that Chipper Jones is retired.

Chris Carpenter represents the lone uniformed Cardinal from the pack, but I also got a Dan Haren, whose cards haunt me and remind me we traded him away for 55 games of Mark Mulder.

Those Franchise History cards would look good in a binder, if they were all consistently vertical or horizontal.

Call me an anarchist if you want, but I really hope Alex Gordon and 6 or 7 more Royals start in the All-Star game. Frankly I hope they get all 9 fan-voted slots, and Ned Yost brings in a Royals pitcher before he replaces the first position player.

I got another Cardinal with Lance Berkman, but the big hit is the last card, of Daniel Stange. Now he's certainly no superstar, but I'm always happy to add another autograph to my collection. Just because I have his card, I looked up his stats, and it appears he's now out of baseball, last playing in the 2014 Venezuelan Winter league. Still, I'm surprised to get this out of a repack, and glad to see that not every rack pack is apparently searched.

I don't know what happened to Josh Hall, but he only ever played in 6 games in MLB. Here's an odd stat for you: he started 5 and finished 1, and had no complete games. I wonder if anyone else has ever only started and finished games with more appearances. Doug Waechter had a bit more success, playing in 6 out of the 7 seasons from 2003-2009.

Diving back into my pack stash, I found a pack of 2013 Topps Series 2 that I got in a repack. I know it was from a repack because there's no reason I would have bought one. I already built this set from a Jumbo Box of Series 1 and 2, so all of the base cards will be duplicates that go into my trade list. So, let's hope whatever inserts or SPs are new.


Ervin Santana and Billy Butler should have stuck it out with the Royals a little longer. They would have found their way onto the AL All-Star team this year. Yes, I know Santana's a pitcher, but I'm sure the KC fans would have found some way to get him on the team.

Here's a strong finish; A Cardinal and an insert. I could have sworn I had this Todd Frazier card, but according to my Zistle collection, and the physical box where I keep these cards, I didn't, so the pack did net me a single new card. The rest will hopefully be traded away to someone trying to complete their base set at some point.
Posted by Wilson at 22:00 No comments:

Plowing ahead with my eBay penny cards, today I've got 5 cards that cost me a nickel.


5 cards for 5 cents, and they're all from a new set to my collection. I've got Fleer Tradition cards from many other years, but these are my first from 2004. And, I got one Cardinal in his pre-St. Louis days, John Lackey.

2014 Bowman Contest at Waiting 'til Next Year

How would you like a nice start on a 2014 Bowman set? P-town Tom won a whole bunch of 2014 Bowman from My Cardboard Habit, and decided to collate it all and regift the 2nd and 3rd partial sets he put together. The prizes are 400 and 358 of the 440 cards, respectively. And who doesn't love some shiny Chrome cards to go along with the sets? 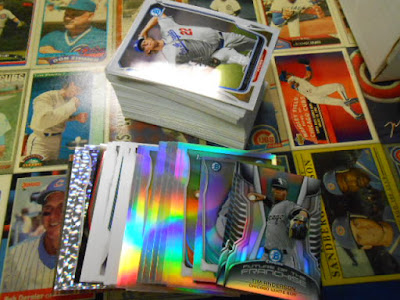 Just go visit Waiting 'til Next Year and leave a comment to enter. You've got a little less than two days
Posted by Wilson at 22:00 No comments:

A Jumbo From the Pack Stash

Today I have a Jumbo Pack of 2008 Upper Deck. That's 36 cards, including two Rookie Debut cards visible through the clear wrapper on the back of the pack.

Jeff Weaver played half a season for the Cardinals in 2006, won a World Series, then promptly priced himself out of St. Louis's range. I'll admit when he left I was wondering if we'd regret it, but he regressed a bit and in the end I think it was in the Cardinals best interest not to pay him as much as he got in Seattle.


A few weeks ago, someone called no-grass cards like Peavy's "Tattooine cards" after the desert planet. Now that's all I can think of when I find one.


Check out that Gigantes jersey on Brad Hennessey. I'm glad when the photographers show up on special uniform days. The three Mets cards show different jerseys, too, and clearly the two Blue Jays cards do as well.


Since the Rookie Debut cards are what's immediately visible outside the pack, I'd wager that's the reason this particular pack made it to the repack factory. Ryan Hanigan and Dave Davidson weren't exactly the hottest prospects in a set with Ian Kennedy, Joey Votto, and Clay Buchholz. That Yankee Stadium Legacy set is kind of cool, but I don't think I'll be tracking down the other 6000+ cards for it. It'd be pretty awesome to have something like this for Busch Stadium, but I definitely understand the New-York-centricity of the card collecting world.
Posted by Wilson at 22:00 No comments:


To celebrate 2 years of posting and 500 posts, there's a giveaway at Baseball Card Breakdown. Just go leave a comment with your favorite of the 500 posts to enter. Do that and you'll be thrown into the randomizer to win some fabulous prizes. So go enter. Now!
Posted by Wilson at 22:00 No comments:

Email ThisBlogThis!Share to TwitterShare to FacebookShare to Pinterest
Labels: giveaways

I've had a lot of one card eBay posts, so today, we're doubling up, with two penny cards from 2003 Topps.

I like to consider this a "Final Tribute" card for Nick Neugebauer. After all, he last played in MLB in 2002. He first played in 2001, and was only 22 when he last played, so Topps could be forgiven for thinking he'd be back at some point. On the other side we have Jose Valentin, who didn't even hit the majors (also with Milwaukee) until his age-23 season, but played for 16 seasons. It's gotta be the mustache.


4 packs have given me 20% of the 90-card base set, but of course future random packs will be likelier and likelier to have duplicates of my current cards. I think I will go ahead and purchase a box or two of these, and show you my progress in completing the set or master set.
Posted by Wilson at 22:00 No comments:

Today I've got another first for my collection, a card from 2003 SP Authentic. Considering that hobby boxes are still going for about $1/card, I'd consider the penny for this base card a pretty good deal.

Obviously that $1/card price isn't evenly distributed, but instead people are chasing the high-end inserts. But I'd say I got at least 10-25x my money's worth here. With only 90 cards in the base set, they're all bound to be stars, too, and Miguel Tejada is no exception.


I also brought down my arbitrarily-rounded per-card eBay spending by another .001 cent, so there's that.

Finally, I pulled a Cardinal from one of these. Although, he's already gone from the team, and has been demoted to the minors for about a month. Yes, it's Allen Craig.

There's really nothing dictating which Hernandez these Eye Blacks belong to, so I'm going to go with Keith Hernandez. I was doing some online searching and saw full boxes of these going very cheaply, so I just might pick one up for the fun of putting together the set, and trying for a master set of all inserts.
Posted by Wilson at 22:00 1 comment:

Now that I'm firmly into the mid-2000s, many of my eBay penny cards represent sets I've never seen in person, at least not in my collection. Today is another such example, from 2003 Fleer Tradition Update.
I don't even have any cards from Fleer Tradition in 2003, let alone update. I have vague memories of Graves from his time with the Reds due to the division rivalry with the Cardinals. His name is also one letter short of matching that of a guy who was in my high school class at the time, so he caught my attention for that reason. Maybe that makes me odd, but I have this card and you don't. Unless you do, then I guess you got me this time.

After 2 packs, I'm still without a Cardinal. I haven't really combed the checklist to see how many I should expect, but among the 90 base cards I believe there are 6, counting current and former members of the team. I'm still liking the cards though, other than the awkward scans that result from the mix of horizontal and vertical cards. Maybe I should have bitten off a bigger chunk of the pack stash and put a few packs into a single post.
Posted by Wilson at 22:00 No comments:

My eBay randoms are getting into the territory where there are many sets with which I am unfamiliar, since I didn't actively collect from about 2000 to 2010. For example, I figured this was a Donruss insert, when it fact it's a base card of an entirely separate Diamond Kings product from 2003.


You can almost feel the pain my scanner was in when trying to make sense of the shimmery background on this card. "I give up, give it rainbow stripes". These cards don't quite grab me like the near-caricatures of the 80s and early 90s Diamond Kings, but like I always say, for a penny I'm happy to have another sample from a heretofore unseen set in my collection.