Erin Zam has put together a pretty cool looking project. I'd shudder to use a 1950s card, no matter the condition, but a few made from the foil-stamped-crazy 90s might be kind of cool. 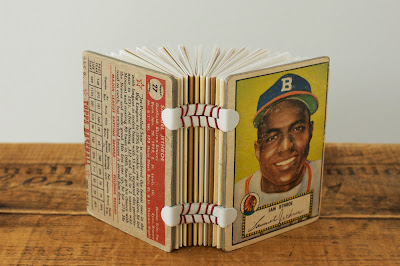 It looks like her Etsy shop is empty of the books at the moment, but check out the link above for a full description.
Posted by Wilson at 18:00 No comments: Links to this post

Email ThisBlogThis!Share to TwitterShare to FacebookShare to Pinterest
Labels: cards

I've redeemed 9 codes in the Topps Diamond Giveaway.  The first 8 are somewhat in the "junk" category, although lots of people really want my 1972 Bob Oliver for some reason.

#9 gave me a hit on the Diamond Die Cuts.

I'm a little torn because I like CC, but probably not enough to keep a valuable (at the moment) card when I have the opportunity to make postage-free trades. My best offer currently is a 1960 Bobby Avila, which would become the 2nd oldest card in my 80s- and 90s-heavy collection. Hopefully someone will offer me a pile of cards for him, which I can then parlay into some more I really like.
Posted by Wilson at 18:00 No comments: Links to this post

I like leading off posts with links, so it's unfortunate that Topps has just about torn down the Million Card Giveaway site. You can click that link, but it won't show much except a link to the Diamond Giveaway site. The deadline to enter codes was February 1st, and the deadline to request delivery was March 1.  I was wheeling and dealing all the way up until the deadline, and requested delivery on March 1.  I'll give Topps the benefit of the doubt that legions of other collectors also requested delivery that day, because I just today (April 15!) received a confirmation email with shipping information.

I overpaid (overtraded?) for the LaRussa rookie, but it's one I've wanted since even before he came to manage my beloved Cardinals. I offered a few commons for Dave McKay and Dave Duncan, which almost complete the LaRussa Coaching Cabal. Apologies to Jose Oquendo.
1964-BB-TS1-244-NA Tony LaRussa RC
1981-BB-TS1-461-NA Dave McKay RC
1968-BB-TS1-261-NA Dave Duncan

All in all, I think I did pretty well. Hopefully when the cards come I'll find they're in great condition. And sorry to everyone I kept offering all my cards to for a 1952 Mantle.
Posted by Wilson at 20:00 No comments: Links to this post

I've been signed up for a few days now, but I'm very excited about the Google Code Jam.  This will be my 3rd time competing.  The format has been pretty consistent for the last 3 competitions, with one 24 hour qualification round, in which anyone solving one Small Input and one Large Input problem advances, followed by Round 1, split into 3 sub-rounds.  The top 1000 from each sub-round move on to round 2, and if you fail in Round 1A, you can retry in Round 1B and 1C.  Round 2 whittles the 3000 down to 500, who all win a coveted Google Code Jam T-shirt.  Round 3 takes the 500 down to 25, who win a trip to the Finals.

2010
I've done a lot of dynamic programming this year, which I feel has been my weakness in the past.  There's usually at least one dynamic programming problem per round, so hopefully that'll give my scores a little bounce.  This year, again, I'll be traveling during the Qualification Round, but at least I'll be closer to my own time zone.
Posted by Wilson at 07:00 No comments: Links to this post

Email ThisBlogThis!Share to TwitterShare to FacebookShare to Pinterest
Labels: codejam

For various reasons, I've decided I should have a blog.  First among them is that I've started collecting baseball cards again, and have entered the world of negotiating trades online.  At the very least this will give me a place to keep my want lists and trade lists.  Hopefully it'll inspire a little more confidence in my trading partners as well, as compared to an email out of the blue and a promise to send cards in the mail.  I also hope to have lots of other good stuff, such as my NFL playoff probability calculations (I picked Green Bay over Pittsburgh way back in week 11), and various math nerd stuff because I can't help myself.
I'd bet the initial post of many blogs lays out plans that don't really get followed to a tee.  So, we'll see what happens.
Posted by Wilson at 19:00 No comments: Links to this post